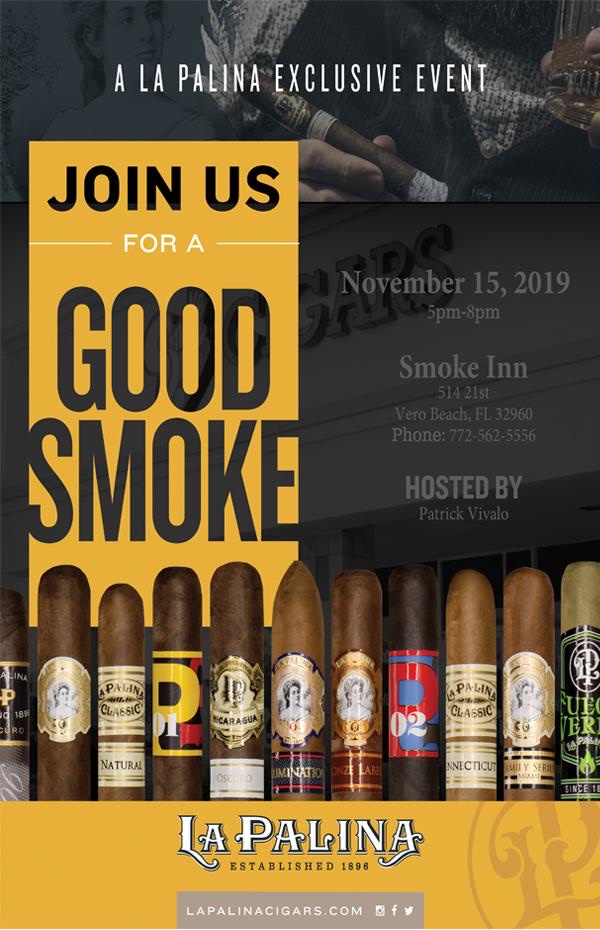 Join us along with Patrick Vivalo for an evening FULL of La Palina Cigars!
Patrick will be offering the following deals:
Buy four La Palina Cigars Get 1 FREE!
Buy ten La Palina Cigars Get 3 FREE!
Receive 20% off when you buy a box of La Palina Cigars, PLUS an event only five pack of cigars!
We hope to see you on the 15th!
About La Palina:
Samuel Paley opened the Congress Cigar Factory in Chicago in 1896. Its first cigar range was La Palina, named in honor of Sam’s wife, Goldie Drell Paley. Three decades later, alas, Congress suffered the fate of many turn-of-the-century cigar brands and folded with little fanfare.
La Palina would have remained a footnote heritage cigar brand were it not for Sam’s grandson, Bill, the son of CBS founder William S. Paley and socialite/fashion icon Barbara “Babe” Paley. The revival of La Palina in 2010 was driven by Bill’s desire for a personal signature luxury cigar. Following his grandfather’s dedication to excellence and his parents’ meticulous attention to detail, Bill began a journey to relaunch the all-but-forgotten brand, dedicating himself to creating cigars emblematic of the original La Palina.
The new La Palina ultra-premium handmade cigars offer a meritage of the finest aged tobacco leaves selected and blended by master artisans. The line exemplifies master craftsmanship, rolled with unwavering quality according to tradition and redolent of the classic bon vivant Paley style. The draw is effortless, the burn even, the blends smooth and well-rounded, the construction flawless: an unforgettable cigar experience for the discerning palate — one, we’re quite confident, that would have made Sam Paley himself quite proud.
27.640786 -80.383658