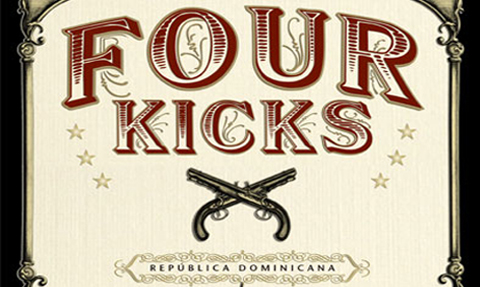 Let’s face it, everyone has a rebellious streak in them. Whether you’re 16 and “We’re not going to take it” is your anthem or you’re a cigar exec that’s tired of corporate America. Well, Jon Huber, formerly of CAO, recently found his rebellious streak and fortunately for cigar lovers worldwide, the result is the Crowned Heads Four Kicks. “Four Kicks is about turning your back on the corporate machine and making your own rules.” Is how Huber describes his new cigar, which is blended and rolled by Ernesto Perez-Carrillo. The stats on this smoke are as follows: The corona gorda is sized at 5 5/8 x 46, has Nicaraguan binders and fillers wrapped in Ecuadorian Habano and retails for around$7.

Now for the good stuff, the cigar! In the first third, the Four Kicks gives a square kick in the mouth with a lot of spice and earthiness and stays that way up until the end of the first third, to which it mellows out. In the second third, the smoke stays mellow and smooth through the first half of the third, then the spicy flavors pick up again, but not quite as strong. To this point the draw is effortless and the burn is a little crooked, but good.

In the final third, the Four Kicks finished with a mild spiciness and earthiness. Overall, it’s a very smooth, medium bodied cigar with a good burn and effortless draw. A solid three flames on the Mayor’s scale.

Until next time, Happy Smoking!