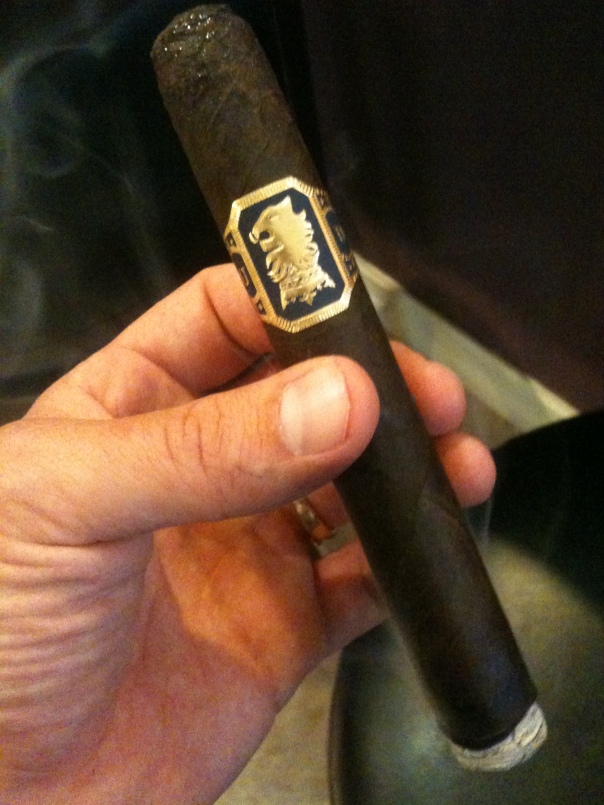 Every once in a while, a cigar comes along that really surprises me in a good way that I wasn’t expecting. The latest being the Undercrown by Drew Estate. I had heard a little bit about this cigar and from what I heard is that it was essentially a smoke in the Liga Privada line, which isn’t entirely incorrect, but the real story behind the cigar was that Drew Estate asked their torcedores to not smoke the regular quantities of cigars they were making, so they had some of the best torcedores in the factory make cigars especially for them. In turn, the cigars turned out so well that Drew Estate felt it was necessary to release to the public in large quantities.

Now the cigar I was generously given by “Honest” Abe Dababneh was a 5×54 robusto that is wrapped in Otapan Negro Ultimo Corte, with T52 Connecticut River Valley Stalk Cut and cured habano binders and filled with Brazilian Mata Fina and Nicaraguan Cuban Seed. The Undercrown will come in boxes of 25 and the robusto is priced at $7.45 a stick.

Now let’s get to the good part, the actual cigars tastes. In the first 2 or 3 puffs, the Undercrown is kind of spicy but after that it transitions to a light, earthy flavor with some spice in there for good measure. At this point it was a medium bodied smoke with good construction and the flavors were very good.

In the second third of the Undercrown the earthy flavors with spicy notes continues to be the predominate taste I get, which is surprisingly good since I’m not big on the earthier cigars. Still a solid medium bodied cigar but the flavor lightens up towards the end, the draw gets a little firm, but not so much that it hurts the quality of the cigar. The burn is a bit jagged at this point, but again not bad enough to complain.

The last third of the cigar finds that the flavors switch entirely to predominantly spice with some earthy undertones that is an excellent change of pace. The flavor of the Undercrown remains this way until the end of the smoke. The draw on the cigar was again firm, but not firm enough to make me complain, just worth mentioning. The only negative I could find was that it did burned jagged and I had to touch up a small portion of it before it began canoeing too bad.

Overall, I found the Undercrown to be a very good cigar that I would probably try again at some future point and would be a lot better if it was allowed to age for a while. So, until next time, Happy Smoking!